How fast can you change your model?

How It Went Down

For years I have seen and been a part of discussions on forums stating whether one CAD tool is better than another. Industrial designers have told me that they like SolidWorks over Pro/Engineer because the icons look better. It started to dawn on me that designers’ perceptions were developed by the users they had encountered, and many engineers they meet don’t run the software correctly. Therefore, misconceptions occur.

For the event, we were excited to learn who signed in at the door. NIKE, Sears, Design Integrity, Northrup Grumman, PTC, Webb Scarlett deVlam, Kodak, University of Illinois at Chicago and many past Design Engine students.

What We Set Out To Accomplish

It’s not how fast you model a product, but how fast you change it twenty times. I pushed the crap out of SolidWorks in the weeks leading up to this event, so that I could share the simplistic workflow for proving form as we do with Pro/Engineer. Now, with SolidWorks 2010, we engineers can do it. Our goal in this controlled discussion is to match our Pro/Engineer surfacing intensive workflow for proving form and designing in the light reflections with SolidWorks. The goal is to modify the geometry 20 times over a 4 minute time frame. This rapidfire progression or modification is one modeling technique Design Engine is known for teaching in the specular highlights class. To inflict impressive modifications requires SolidWorks to maintain parent-child relationships. In SolidWorks, I expect these connections to work, and unlike like Rhino, fall apart, and we were having problems getting these connections to hold together.

In my experience, I have noticed that industrial designers want to prove form when developing a product in an effort to capture form. I have noticed, however, that many industrial designers are happy to just model a form in CAD model where they can’t leverage strategic advantage of parametric controls nor participate in an intense study of parent-child relationships. If we can leverage parent-child relationships, then we can make 20 modifications in four minutes to effectively “prove the form in the light reflections”.

My techniques for forcing SolidWorks to perform twenty modifications in less than four minutes is giving me a problem in a spot or two. Too often, changes in geometry will cause rupture in the parent-child relationships in the model.

The goal is to make SolidWorks look great after so many improvements were made where the workflow techniques were shared with the crowd. The workflow I’ve stated on Core77, which is taught in our classes, may not have been discovered yet.

On the Pro/E side of the shootout, Adam and Vaughn, who are two of my past surfacing students from Colorado’s Karcher Corporation, were happy to present the capabilities of the program. Adam is an industrial designer with 2+ years on Pro/E surfacing, and Vaughn is an engineer with significant product design experience and sits on the surfacing technical committee at PTC. Karcher works on interesting surfacing Roto Molded cleaning products.

On the SolidWorks side, Chris Thompson, a mechanical engineer with significant product design experience, and I ran the show. We both have different modeling techniques, and he is not familiar with the Design Engine workflow for proving form in Wildfire by modifying parts in rapid fire. He has looked at our Pro/E parts, and we had an hour before the event to work out our strategy.

How It Went Down

During the shootout, we tried very hard to keep up with the Pro/E guys. I was actually able to accomplish the same models with the same robustness as I would expect out of Pro/E. Even Chris was surprised by the way we were able to modify the model 20 times in rapid fire. We got plenty of pictures, and we should have made models available for download to complement the article. At the end of the presentations, we invited everyone, participants and guests, to discuss the issues covered in the shootout. I wish SolidWorks would send representatives for the next shootout so that we could get a better feel for their side of the issues.

At the end of the shootout, our SolidWorks water pitcher model lost its parent-child relationships when we tried to modify it. Jim Shaw an avid participant on MCAD Central, was on hand and offered a work around that fixed problem. I tested his suggestion to not link the curves onto the vertex of the surface, and instead, project a curve onto that location. Thus it built the 3D curve off of that projection, which proved to be more robust and did not fail. The real winners were all the participants, whether they use Pro/E or SolidWorks, because the focus was on proving form with a parametric modeler.

SolidWorks does not have a conic function in sketcher like Pro/Engineer does, and it was speculated that maybe they exclude that to encourage designers to migrate to Catia. Conics are valuable for managing in the light reflections. We used splines in SolidWorks as a work-around, being careful of letting the 3-degree curve from doing both conic and concave in the same curve. However, a possible SolidWorks add-in called GeometryWorks was mentioned that may provide this functionality at an extra cost.

Pro/Engineer excels at creating curves on surfaces, known as the “spline on surface” function in SolidWorks. SolidWorks uses bezier and might be a bit harder to control, compared to the Pro/Engineer COS (curve on surface) function, which is a NURBS curve in the interactive module in Pro/E called ISDX. Pro/E allows you to apply end-conditions to the COS (curvature, etc) to any type of plane/edge/surface. A work around in SolidWorks is to create extra features to join two “Spline on Surface” curves to gain more control.

Another place where we found Pro/E did better than Solidworks was with Curve on Surface geometry. It was suggested that the Bezier type spline on Surface from Solidworks was difficult to modify compared to Pro/E. We presented a work-around by joining two splines on Surface features that join. Amazingly enough, this tip helped us modify the curve and then trim in our rapidfire way.

Both SolidWorks and Pro/Engineer have a patch type surface that we compared to the magic button because it may not be the best modeling practice for building 3-part boundary surfaces. The Solidworks “fill surface” feature worked very well and impressively forced curvature and tangent. Pro/Engineer uses a more commonly used term for this: the n-sided surface. The features worked by creating an overbuilt rectangular surface onto a two-, three-, or more part boundary.

SolidWorks has a feature called indent. This coincides with Pro/Engineer’s Dome or Local Push feature. A tool body is used to indent a target body in a similar fashion as is done in sheet metal using a forming tool. This can be used on plastic parts as an alternative to replace face where a face is replaced with a surface body (similar to Pro-E offset -> replace).

The SolidWorks deform feature using the curve-to-curve option allows the surface to be matched to the finished curve. The application of the feature would be used for finger grips, etc. Pro/Engineer calls this an influencing curve in its boundary blend tool.

Pro/Engineer uses variable section sweeps to create control ribbons. The sweep in SolidWorks requires a path and profile, and the angle of draft is controlled by the profile. This can also be replaced using a ruled surface (tapered to vector option) as an alternate technique.

In conclusion, there were no losers. All who participated won by learning a new workflow and new modeling techniques. We pushed the SolidWorks tools and we were able to accomplish almost everything the Pro/Engineer guys could do in terms of modeling and workflow. SolidWorks has come a long way since the 2007 release and we, at Design Engine, are excited to help designers and engineers prove form with these tools. Maybe next time, we compare the surface edit functionality of both tools? You decide and email us your thoughts. [email protected]. 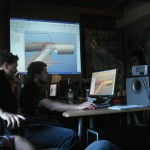 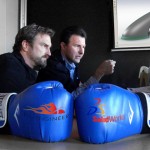 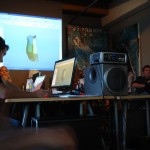 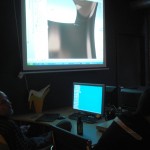 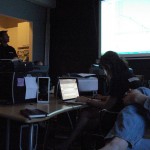 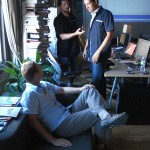 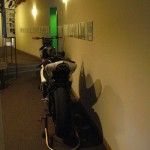 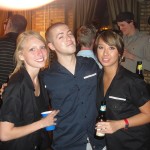 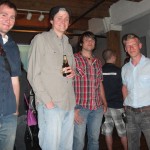 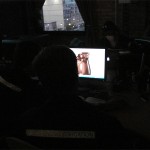 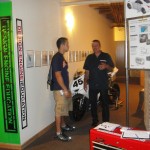 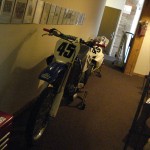 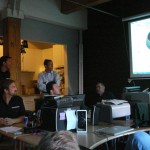 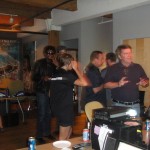 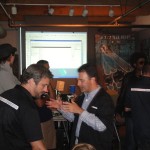 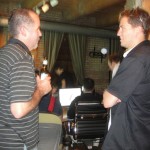 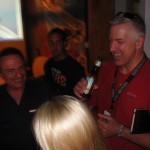