05.08.97 – Through Steve Nardy’s Pro Engineering Consultants, Bart Brejcha worked with the Boyton Beach Gabriel Khouri’s team at Motorola’s International Paging by assisting and training engineers in top down design and surfacing. This Pro/Engineer training style is very different from that of a PTC training class in that we customize the training on the spot.

09.14.98 – University of Chicago Astro Physics group from the Yerkies Observatory enlist the help of Design-Engine to train key members with Pro/Engineer so their team can interface with NASA. The U of C team is building infrared telescopes for the NASA 747 to ultimately evaluate distant forming star fields called SOFIA.  Design Engine prepared and delivered classes for importing large data into then Pro/ENGINEER.

11.02.98 – Several high school graduates come to Design-Engine for Pro/Engineer training hoping to enhance their drafting skills and get jobs in the industry, they get jobs at Kohler and Bobcat.  This is the start of our 3 and 4 week training intensives.

01.23.99 – Design-Engine signs on SkilBosch Powertools for Pro/Surface training.   Surfacing training focus is upon light reflections and use of surfaces for product design.  Highly stylized surfaces becomes a unique Design-engine edge.   This course is now called Creo Surfacing WEEK ONE

02.15.99 – Ignite Product Development comes in for one week of Pro/Designer training this week.  This software evolved into Creo Style module and is now administered as the last two days of our WEEK Long Creo Surfacing training.

04.15.99 – Design-Engine Education signs on Guidant from MN and conducts the then Pro/ENGINEER surfacing intensive.

12.02.99 – Several consultants come to Design-engine from various places for three week training and gain employment with Harley Davidson and Honeywell.

02.11.99 – Design-Engine redesigns the proetools.com web site and launches the site.

04.15.00 – NASA – Johnson Space Center sends physicist working on manned mission to mars for Pro/Engineer training in Chicago. The physicist is on the team to look at radiation from space and spacecraft protections.

06.16.00 – Bart Brejcha Speaks at the PTC World Event in Orlando, FL to 600 engineers and designers about proving form using Pro/Engineer. Talk titled “What PTC and Rand don’t tell you about Pro/Surface”.  These tools have been re-branded as Creo Surfacing

06.16.00 – Bart Brejcha speaks at the Galveston Pro/Users group conference in Texas on surfacing. 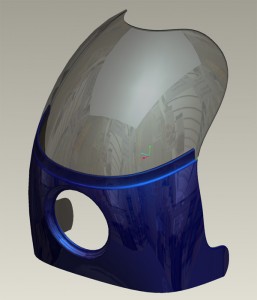 12.11.01 – Bart Brejcha speaks to 100 Engineers at the Wisconsin Pro/Engineer Users Group on surfacing for engineers working with industrial design. In the audience was Kohler and John Deere, to name a couple. Lecture on advanced surfacing using the new ISDX module from PTC.

12.17.01 – Design-Engine speaks to Hinsdale High School about a potential future in industrial design. Bart Brejcha speaks about Pro/Engineer and Alias Studio as design tools.  He explained what Calculus is and how it is used in industry without using the word calculus.